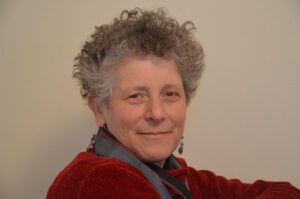 Ann Reichlin is an artist who exhibits her work  throughout the United States including her current site-specific sculpture, Transient Room at the Eastern State Penitentiary Historic Site in Philadelphia, PA.  Ann served on the Ithaca City School District Board of Education from 2015 to 2021. She has lived and worked in Ithaca since 1997.

As residents and communities attempt to meet New York State’s ambitious  clean energy goals, Greenidge Generation–a cryptocurrency mining facility situated on Seneca Lake– takes us in the opposite direction. If energy efficiency and transitioning to renewables is part of the solution, then the Greenidge plant’s massive use of fossil fuel is part of the problem.

In the same way that the fracking industry tried to sneak into New York State about a decade ago, the proof-of-work cryptocurrency industry is slithering into our region hoping nobody will notice. Greenidge Generation should have been a positive clean energy story. The original facility used coal to produce electricity. When the coal plant was closed it was an environmental win. In an effort to re-use the site, the facility was converted to natural gas to produce electricity with the idea that the electricity could be used at peak times. This business model, however, was unprofitable so the owners went to Plan B—cryptocurrency mining.

Unlike proof-of-stake cryptocurrency which uses significantly less energy, proof-of-work cryptocurrency requires mountains of computer servers to accomplish its computational tasks. The Greenidge facility has thousands of these computer servers (a.k.a. “rigs)  each requiring electricity to  operate. Unlike other energy demands which fluctuate with times of days, these servers run at full blast twenty-four hours a day since their goal is to solve the computational puzzle before anyone else does. Greenidge generates its own electricity using the converted coal plant. Whereas the original redevelopment idea for the former coal plant was to supplement the power grid, the Greenidge facility consumes most of the energy it produces thus providing little energy benefit to the region.  And because natural gas is a fossil fuel, the use of this gas adds to the very emissions that New York State is trying to curb. And as Greenidge expands it will add new servers which will require more electricity, which will require the plant to use more fossil fuel which will then emit more greenhouse gas.

In addition to the fuel that it consumes, the Greenidge plant also impacts Seneca Lake by taking fresh lake water into the plant and dumping warm water back into the lake. Elevated lake temperatures may impact the fish and cause unwelcome algae bloom.