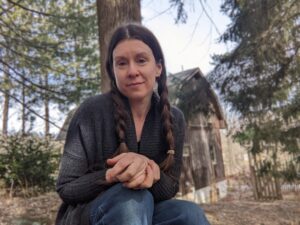 Submitted by Rachel Kennedy for the Democratic View  published in the Tompkins Weekly for April 2022.

Rachel Kennedy lives in Trumansburg with her family. She has served there on the Village of Board of Trustees and the Board of the Ulysses Library. She enjoys making mosaics, growing things, theater, reading and British TV.

I took a bit of a dive this week into the topic of RECYCLING. The landscape is complex. I participate, certainly, as a curbside recycler, occasional redeemer of bottles and cans, and a gloomy but mostly passive receiver of news that an ever-increasing volume of my recycling efforts are fruitless. The scope of the solid waste mess is shocking.  A number of bills are currently in NYS legislature committees to tackle the problem from a number of angles. Among them: A7668 (Sponsor: Englebright), to prohibit recycling symbols on items that are not truly recyclable; S7718 (Kaminsky), to establish Extended Producer Responsibility; and A8668 (Cahill), to provide for expansion of the NYS Bottle Bill. All fascinating, and I’m zeroing in here on the Bottle Bill.

This year marks the 40th anniversary of the original NYS Bottle Bill, the incentive-based program designed to ease burden on waste facilities, encourage recycling, and reduce litter. In a nutshell: beverage distributors charge a container deposit to beverage retailers, who in turn pass the cost on to consumers. Consumers are refunded the deposit when they return the empty container to a retailer or redemption center, who in turn recoups the cost – plus a handling fee – by returning the container to the distributor. The bill was amended In 2009 to include plastic water bottles, boost the handling fee to a current 3.5 cents per container, and shift collection of 80% of unclaimed nickel deposits, amounting to millions of dollars annually, from the beverage distributor to the state. Currently, nine states have similar systems in place.

The new bottle bill as proposed would double the deposit and expand the list of eligible containers to include wine and liquor bottles, and more non-carbonated beverage containers. The logic seems good. Michigan and Oregon, for example, see a return rate of around 90% with a dime deposit. New York return rates of the nickel deposit hover around 65%.

One might wonder, why is it necessary to incentivize bottle redemption where curbside recycling exists? For years, recycling facilities depended in large part on the sale of curbside recycled plastic (and paper) to China. That market tanked in 2018, when China began refusing shipments due to contamination. The reliable demand no longer exists for our outrageous supply, we don’t have the domestic infrastructure to manage it, and a large quantity of curbside collected material winds up in landfills. A greater incidence of items actually being recycled seems to depend on a clean supply of “secondary feedstock”, usable in manufacturing, which the redemption system more reliably offers. Single stream collection of recyclables, at least partly to blame for high contamination, offered the promise of less hassle for households and lower collection costs, but the downstream cost has been high, and not only measured by expanding landfills. The primary conceptual focus of recycling policy in the past decade has shifted toward reducing the higher energy input and pollution associated with the extraction, transport and processing of virgin material, as opposed to recycled material.

If redemption policies/bottle bills help generate high quality material for second use, it makes sense to include wine and liquor bottles, among others. On average, only 40% of glass collected curbside in a single stream system is recycled. The remainder is landfilled or downcycled. Dual-stream recycling can create cleaner results, as can redemption. Evidently, recycling facilities are generally in favor of diverting more glass containers toward the redemption process, (though not necessarily other containers) as glass is difficult and costly to recover and process.

Expanding the Bottle Bill seems quite beneficial, but it would be careless to ignore potential impacts on retailers, who are required to receive redeemable containers of the types they sell. Many grocery stores have developed capacity to manage these returns, though may to varying degrees experience expansion pains. Small convenience stores may be affected more dramatically, as may wine and liquor stores, who would for the first time be responsible for processing returns. Though rather than multiple stops to return different container types, it seems likely that consumers may prefer to use redemption centers, and may perhaps locally be encouraged to do so, as there are a number in Tompkins County. Indeed, different parts of the state may face different logistical challenges.

A best choice, among the three R’s, would be to “reduce”, or “refuse”, as some advocates are now framing it. A 1950’s version of a bottle bill, passed in Vermont, simply banned the sale of beer in non-refillable bottles, et voilà. It lasted only four years due to lobbying by the beer industry. Seventy years later, Americans now generate more than 800 containers per person annually. It’s difficult to get at that problem without threatening the freedom to conveniently consume that many Americans cherish. Until we can collectively figure that out, I’m in favor of legislative efforts to design and recycle us out of this mess we’re in.